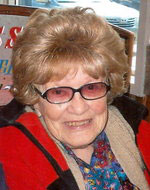 Harriett Kocher entered the corporate business world in 1947 on a part-time basis as a relief manager at various motels. In 1958 she began working for Quality Inns International as a desk clerk, becoming a manager of various motels, to overseeing the construction, to sales assistance and ended her tenure with Quality as Director of their Western Region, headquartered in Phoenix, Arizona.

In 1988 the Bloomsburg University Alumni presented her with their “Distinguished Service Award” in recognition of her accomplishments in the corporate world and also for her work with the BU alumni group in the Washington, DC area. She also received several awards from the Virginia Travel Industry, Northern Virginia Motel Assn. and Metro Washington Motel Assn. of America.

Harriet was the Corporate Director of Sales & Marketing for Choice Hotels International and consultant to sales and marketing divisions throughout the hospitality industry. Harriet was a pioneer in the hotel and hospitality industry and set standards of performance and execution that are still held in high esteem today. Since 1986, we have honored Harriet’s accomplishments and vision with the Harriet Kocher Award which is granted to a Choice Hotels International employee or a member of the Choice Hotels Owners Council who demonstrates an outstanding contribution to the Choice system, the community, and the overall hotel industry. The person chosen for this honor upholds the same high standards of excellence that Harriet Kocher did in her service to the Choice family of hotels.